Looking Back on the August 3rd “Summer Camp” Chapter Meeting

Before we report on this week’s “summer camp” – the third camp session this summer, we need to report on some other activities that have seen Harmonizer participation this summer.

Right after International some of our guys went on a “Barbershop Harmony at Sea” cruise to Bermuda. Joe Cerutti and Cindy Hansen were the leaders of the group and word is they did a lot of singing and had the usual fun on a cruise. Our guys included Ian Poulin, Dan and Laura O’Brien and Ben, Dick Dangel and Carol, Bob and Anne Rhome, and Sam McFarland. Cindy’s husband, David, was also there to sing in various quartet combinations.

And how about the great news releases and coverage our own Martin Banks has gotten for the chapter in local media and in Society media! Good work.

This past Sunday, Aug. 1st, another group of Harmonizers and their families and friends went to Nationals Park to see the Nats play the Phillies. Our Nats almost pulled off a three-game sweep, but got beat Sunday, 6-4. Thanks to Brad Jones for organizing this fun time – he even got us seats in the shade (and as it turned out, we kept dry when a little rain shower passed over). Other members in addition to Brad were Alan Wile, Ike Evans, Phil Ashford, Gary Mankin, Bob Rhome, Chuck Powell, Jerry Kindred, Tom Giffith, Rick Wagner, Joe Wagovich, Max Kieba, and Jack Pitzer.

Then here is a report from our guys in Missouri. Last week, Gary Plaag, Chris Buechler, Chuck Harner and Joe Cerutti attended judges Category School on the campus of Western Missouri State, in St. Joe. After a week of training and testing as to their skills in setting numbers and ability to offer remarks and suggestions to competitors, all “passed” and are certified. This is Joe’s first time as an official judge, while the others were there for recertification. Joe is a music judge, Gary is a presentation judge and Chris and Chuck are contest administrators.

YeEd figures we will get more news from St. Joe after this week’s Harmony University on the same campus. Joe and Gary are on the faculty there. Reporters tell me Patrick Kim, Ken Fess, Ray Kahler, Tom Gannon and Bob Wachter are attending classes this week as part of the school. Chris and Joe Sawyer are attending a special event as part of Harmony U called Director’s College. One tradition at Harmony U is the chance to enjoy all the ice cream you want in the evenings. So YeEd figures we will hear about that too!

It was great to see Victor Hills back from the mountain city of Santa Elana in Belize. He was part of a church mission group who went there to staff a summer Bible camp for over 100 children, as well as to help with construction projects. Victor ran the music part of the school each morning, and got some good exercise hoisting lumber and shingles each afternoon.

Now a report on the third “summer camp” at Durant on Aug. 3rd.

It was a busy nite. History displays were up again. Chairs facing the stage and a screen for the evening’s presentations. Camp director, music vp Terry Reynolds, did a great job for these three weeks.

Will Cox did the warm up and Mike Kelly helped the guys learn another Barberpole Cat song.

President Newton did a detailed presentation about chapter finances – where the money comes from and how it is spent. A few points he made: having dues income from 200 plus members helps; our shows bring in about 1/3 of our income; package shows also bring in a lot; fundraising such as selling Entertainment books, scrip cards, and White House Ornaments, are a huge income factor; we get several thousand dollars in grants from the Alexandria Commission for the Arts; and as our sponsor, the Alexandria Dept of Recreation, Parks and Cultural Affairs provides a cost free meeting space for chapter meeting nite and board meetings and other events. Dick stressed ways guys could make contributions to the chapter including checking into matching offers from their employers. He also explained the various ways members and their families or our patrons can support the Harmony Foundation.

Brad Jones then alerted the guys to the Harmonizer Legacy Endowment plans. More details will be coming out in early fall. The goal is to establish an endowment fund that will cover major costs in the future and protect us when we take a hit like we did when there was 20-plus inches of snow during our Singing Valentine dates in 2010.

Next activity was a different kind of tag taught by Dick Dangel. He says it is a “polyphonic” tag – all four parts sang a different melody. He got it from a general session at a Harmony University in 2005. It was fun.

Terry finished explaining the judging categories – tonite was presentation. He also explained how judges are trained and certified, such as our guys just did this past week. And he alerted guys who might want to become a judge as to how the process works.

Alan Wile continued his Harmo Heroes project and drew names from the hat of six more guys who he will photograph and get their bio together – all aimed at the website so we know each other better.

Membership vp Ken White introduced another long line of guests – many singers and prospects and a couple applicants on the list. Bob Thames was with us and brought greetings from our other Harmonizer friends in The Villages in FL.

Bob Rhome was busy collecting the forms we all need to submit to him regarding housing and tickets for the fall contest in Lancaster, PA, Oct. 1-2.

Like all good summer camps, we had a special treat of S’Mores for break. Thanks again to Pat Pitzer for making the great desserts. And we had them without a camp fire!!

After break we had a few Moments in Harmo History (YeEd was quickly corrected after he told the stories: we are just over 60 years as a chapter – not 70, and Bud Arberg was our third director.)

Second half of the nite was our Summer Camp Tag Quartet Contest. Entries had to sing two tags for the judges. So the break was also filled with quartets all over the hall doing a couple last minute times thru their tags. It was fun to see! We had eight entries! Lew Klinge was mc again and we all got some good laughs. He made his usual pretend call to Ev Nau and discussed the status of things in Alexandria with him. The biggest laugh was when Lew told Ev we tried to sell our old uniforms to funeral parlors in Miami Beach, but they only wanted the coats – no slacks or shoes!!

We got things put away and a nice crowd got over to the afterglow.

Terry was given a good round of applause from the guys for his work on the camps. He did remind guys that we would be back on the risers and singing up a storm next week.

(This message is prepared for your review if you were there, for your information if you had to miss, and as a historical record of the great things going on each week at an Alexandria Harmonizer Chapter meeting. —Ye Ed.)
Posted by editorjack at 9:41 AM No comments: 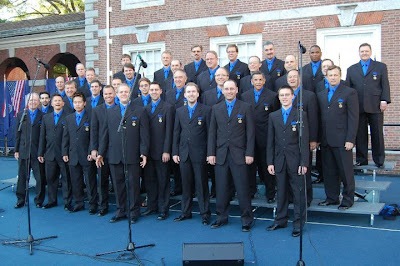 Under Master Director Joe Cerutti, the Alexandria Harmonizers Chorus competed this year among 27 groups from the United States, Canada, and Great Britain. With a total of 16 international contest medals including four gold medals, the Harmonizers have taken barbershop harmony and the name of Alexandria, Virginia across the United States, and indeed the world, in landmark performances in the Nation’s Capital, Carnegie Hall, Disneyland, and Canada, on the Internet, and in television broadcasts for the Kennedy Center Honors, Wolf Trap Galas, and America’s Got Talent.
Posted by editorjack at 8:01 AM 1 comment: 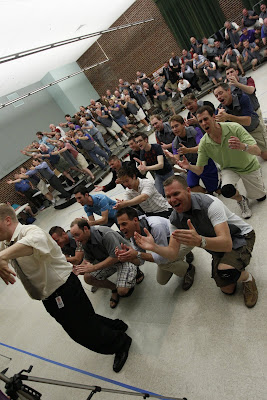 The Alexandria Harmonizers will be holding Open Auditions on Thursday, August 26, at 7:00PM at the Oswald Durant Center, 1605 Cameron St., Alexandria, VA, near the King Street Metro Station.
We are seeking auditioners for 30 available slots on our Risers and Front Row. All voice parts may apply.
No preparation piece is needed. Auditions will be conducted by Master Director Joseph Cerutti, Jr., or one of his Assistant Directors.
Stage and choral experience strongly preferred but not required.
To sign up or for more information contact Phil Ferguson at philharmonizer@gmail.com
Posted by editorjack at 3:19 AM No comments: