Tonight the Harmonizers will be giving their annual free performance outdoors at Market Square in Old Town Alexandria, starting at 7:30 PM 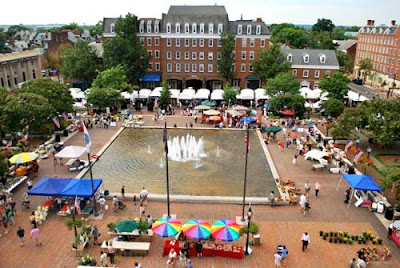 Posted by editorjack at 8:31 AM No comments:

Looking Back on the August 10th Chapter Meeting

Director Joe was back from Harmony U and over 80 other Harmonizers were back after some summer time breaks – everyone ready to get back to singing and back to work in prep for upcoming shows AND the district contest the first weekend in Oct.

(YeEd noticed a lot of bronze medals last nite too!)

After Tony Colosimo did the vocal warm ups, Joe spoke briefly about the week in Missouri with all the other barbershop leaders, judges and students at the school. He was modest and did not share that we was asked to direct the Saturday nite chorus on the show they had.

But he didn’t talk long, and got the guys right to work on a full song list for this Friday’s show at Market Square in downtown Alexandria – another show we are doing for the city as a thank you for their support of the chapter. The assistant directors all worked so they would be prepared to direct their songs for the show. Greg Tepe is show producer.

Joe stepped in now and then and especially did some review on the contest songs (we will use them in the show, tho cut out the stage moves for “Hello My Baby” since the risers will be on the cement deck outside City Hall.

A couple guys figured a way to get our colorful banner to display above the chorus – so that will go to the show too. Membership VP Ken White (who gets a gold star for cleaning out the membership/guest sign-in cabinet after years of guys stashing stuff there) will have colorful postcards, which match the banner, to pass out to interested singers in the audience Friday nite. Some guys not on the risers can help pass them out.

Ken White reminded everyone of two import 26th dates. On Thursday, Aug. 26th, the music team will conduct auditions for men who want to sing with us. Session will be at 7 pm at Durant. Joe will conduct the actual audition. All are asked to promote this event. We are not needed to attend, but can certainly bring someone who is interested. The marketing crew is promoting the event in circles where musicians might see the opportunity and come check us out.

The second date is Oct. 26 – another regular guest nite during our Tuesday meeting and rehearsal. For sure we all come to that one and bring others prospects!

Dick Hall reminded all members that they can earn a lot of money for the chapter by buying Marriott script cards in advance of the district contest. You buy $100 script cards from the chapter (see Dick or Carolyn), then use them to pay your hotel bill in Lancaster. Rooms are a little over $100 a nite. The chapter pays less than $100 for the card and earns a healthy percentage of net. SO – everyone needs to do it. See the Halls and let them know how many cards you want to buy.

For break, we celebrated summer again and had a huge watermelon feast during break.

After the break, Ken Fess, producer of our recent Westminster show, presented chapter president Dick Newton a check for nearly $41,000 as income from ticket sales. Hurray!! And thanks again Ken.

Ken also announced that the proposed show with the Ambassadors of Harmony will not happen. Too many schedule conflicts with the two busy choruses to allow us to contract a show venue.

Tom Kraus plus Jeremy Knobel, Phil Ferguson and Joe Cerutti have joined forces as the last four class presidents of new guys going to International to encourage total commitment for medal worthy performances among all of our singers for shows and contest gigs in the months ahead. More to come via email.

Music vp Terry Reynolds reviewed plans for release of new music and for schedules of learning new songs. He also reviewed plans for self evaluation processes as we get ready to form a contest chorus for Lancaster. The Make Me Better recording plan will continue as well as visual self evaluations. He announced that the Sept. 12 fund raising show for a Bowie, MD, nonprofit group has been canceled since the group has had to go out of business.

Bob Rhome is eager to get registration orders (tickets) and housing reservations for the Harmonizers who are going to Lancaster. Your deadline is Aug. 31st.

Alan Wile continued his successful Harmonizer Heroes project and thanked the guys who have prepared their bio sheets for Alan to post online. He is working to get a complete set of bio reports from all of us on the web.

President Newton announced the official letter has been received from the Alexandria Commission for the Arts alerting us that we will be given a grant of $11,365. We are humbled to know that we have been chosen to receive the grant.

He also reported receiving $1000 from our Mid-Atlantic District to help with our expenses for International in July.

And he read a warm personal note from Ms. Shirley Bolstad, widow of the late Bruce Bolstad. She included a generous financial gift as well.

Then it was back to work on the show tunes for Friday evening. Show is at 7:30 pm near city hall (where the fountain is on King Street about 2 blocks up from the Potomac River). Harmonizers can park underground and have their parking ticket validated to cover the cost. Chorus comes already dressed without make up for warm up in the foyer of City Hall.

Another gold star from this week goes to Bob Blair and Klye Blomgren who hauled all the 50th anniversary display boards back to our storage unit.

All the best to Jeremy Knobel who will be absent a lot for the next few months. He is starting work on his law degree. And good luck to the other college guys who are heading out in the next couple weeks. YeEd thinks Kellen Hertz and Edris Qarghah plan to come back for district. YeEd also hears that Will Daniel Mudd-Simmons may be back in the area for college and we hope he will be singing with us soon.

(This message is prepared for your review if you were there, for your information if you had to miss, and as a historical record of the great things going on each week at an Alexandria Harmonizer Chapter meeting. —Ye Ed.)
Posted by editorjack at 11:16 AM No comments: 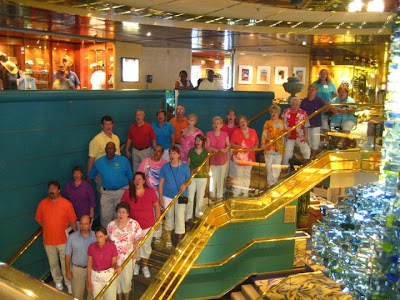 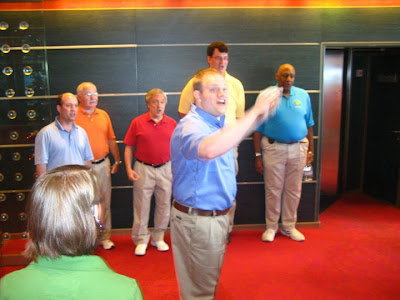 The Harmonizers that went on the Barbershop Harmony at Sea Cruise to Bermuda had a great time. We were small in number but got to know each other a lot better. The only male barbershoppper who was not a Harmonizer was David Ellis, Cindy Hansen’s husband.

There were no female tenor’s on the cruise so David Ellis had to sing female tenor with the women in addition to singing with the men. Also, the only female baritone on the cruise got sick and Joe Cerutti had to sing baritone with the women. The Harmo family that were with us was Dan O’Brian’s wife Laura and their son, Dick Dangel’s wife Carol and Bob Rhome’s wife Anne. The single guys were Joe Cerutti, Ian Poulin, and me. The number of female barbershoppers attending were slightly larger than the males.

Sam McFarland
sammcfarland@gmail.com
Posted by editorjack at 8:55 AM No comments: